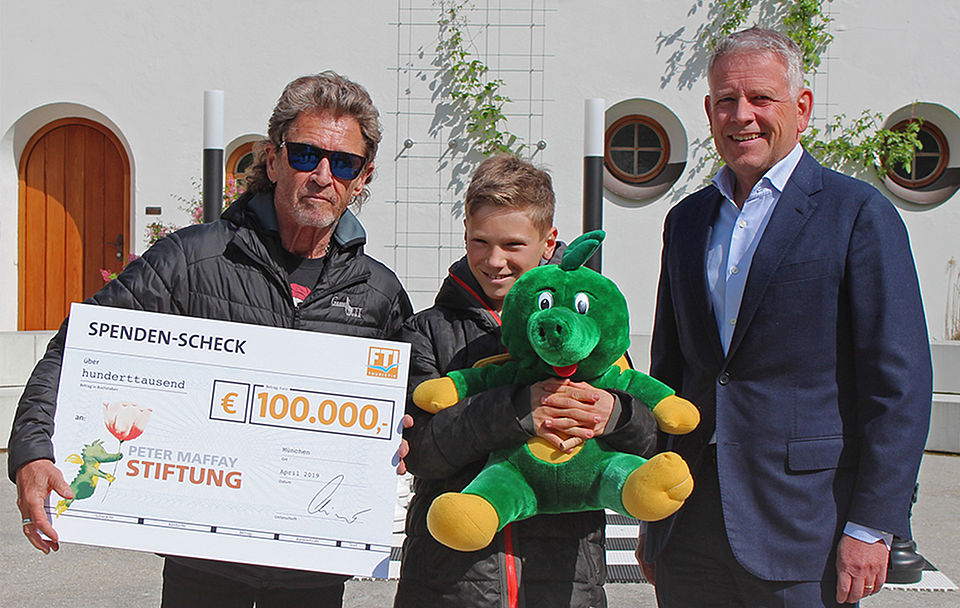 When "Tabaluga" the movie was launched in December 2018, the tour operator launched a campaign in which 20 euros per family booking were donated to the Peter Maffay Foundation. The cheque of 100,000 euros was handed over yesterday.

Happy faces at Gut Dietlhofen near Weilheim in Upper Bavaria: Ralph Schiller, Managing Director of the FTI GROUP, handed over a cheque of 100,000 euros to the famous singer Peter Maffay yesterday. For every family booking made between 6th December 2018 and 30th April 2019 the tour operator donated 20 euros to the “Peter Maffay Foundation”. The campaign kicked off in December 2018 with the film premiere of the 3D animation of "Tabaluga" about the little dragon from Greenland, known for Peter Maffay's successful concert and album series. Film distributors Sony Pictures Releasing and FTI Touristik took this opportunity to start a broad cooperation which was formed in handover of the donations as the ceremonial conclusion.

"The children and young people who come to us experience ecological agriculture, come in touch with animals, can power themselves out on the sports field or attend creative workshops," explained Peter Maffay. "We are very happy about the donation amount of 100,000 euros, because it will enable us to expand our range of services. "

"With Tabaluga we have found an ambassador who is ideally suited to FTI Touristik and our family offers," said Ralph Schiller, explaining the basis of the cooperation. "We are delighted that the donation will benefit Gut Dietlhofen. This allows us to follow directly what the help is doing on the ground.”