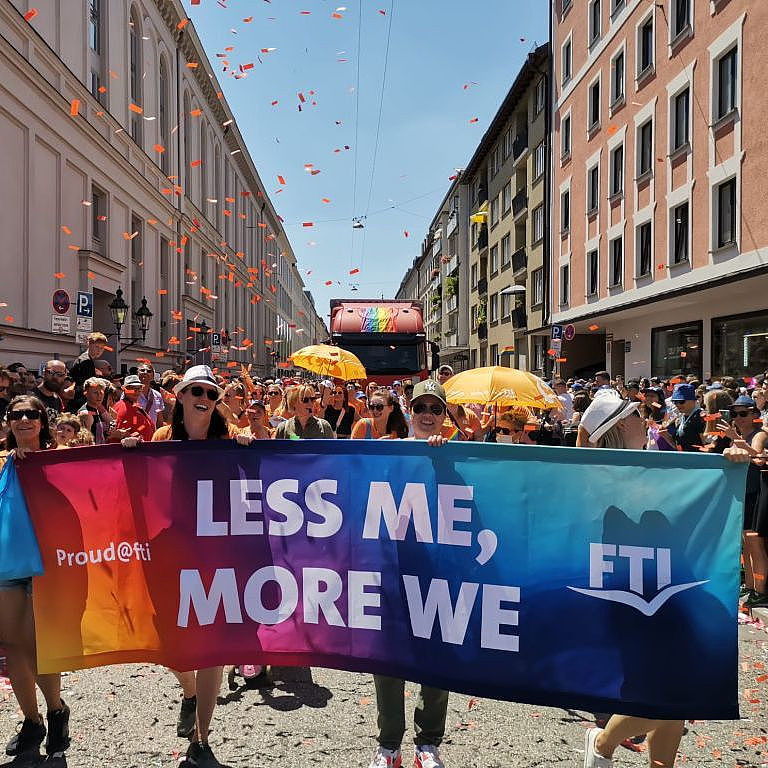 To promote inclusion, the FTI GROUP has set up a diversity group. This group took part in Christopher Street Day in Munich on July 16, 2022.

Diversity in companies reflects the diversity of sexuality and gender, of different religions, ethnic groups and social backgrounds, as well as people with and without mental or physical disabilities. At the FTI GROUP, it has long been a daily topic, as the Group promotes inclusion wherever possible. As part of this, a Diversity group was founded in June 2022, which in the future will develop and implement various initiatives, actions and programs to advocate for the most diverse, harmonious and safe togetherness possible at FTI GROUP.

As the first event after the group was founded, around 30 members took part in the Christopher Street Day parade in Munich on July 16, 2022. They also ensured that the headquarters in Munich was extensively decorated with a rainbow flag on two sides. During the parade, the FTI colleagues represented the motto "Less me, more we" with a rainbow banner and in bright shirts in the FTI color shade of orange. In total, 400,000 people took part in the biggest Christopher Street Day to date in the Bavarian capital in bright sunshine. The day is celebrated every year in cities around the world as a day of celebration, commemoration and demonstration for more rights, acceptance and integration of the LGBTIQA+ community.

The Christopher Street Day action marks the kick-off for the FTI Diversity group proud@FTI. Further activities to raise awareness of queer issues and strengthen diversity within the company are already being planned.